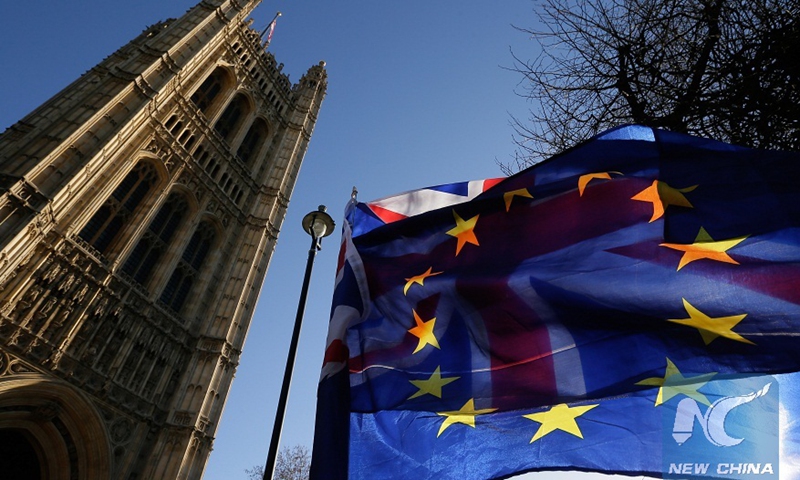 An EU flag is seen in front of a UK flag outside the Houses of Parliament in London, Britain, on Jan. 17, 2019.File photo:Xinhua

The EU on Tuesday vetoed the buyout of promising US cancer test startup Grail by Illumina over fears the deal could one day create a monopoly.

Illumina's takeover of fellow US company Grail, would "hamper innovation and reduce supply in the emerging market for early cancer detection blood tests," where Grail competes with other biotechs, the European Commission said.

The EU's refusal to approve the $7.1 billion transaction comes despite Grail doing no business in Europe, and was based on the possibility that the merged company could dominate the cancer test market.

This is sometimes referred to as a "killer acquisition" where an industry giant buys up a promising company, thereby stifling its development into a potential rival. The commission's concern is that Illumina is the only credible provider of technology to develop and process the type of cancer tests developed by Grail and its rivals.

"With this merger, Illumina would have an incentive to prevent Grail's rivals from accessing its technology, or to put them at a disadvantage," said the EU's competition commissioner Margrethe Vestager at a press briefing in Brussels.

Vestager said Grail "generates very little revenue today as its product is still under development... but has strong competitive potential.

"Its revenues are expected to grow exponentially, and its technology is of great importance. It can still revolutionize the treatment of cancer."

In the US, the Federal Trade Commission opposed the deal as well, but a US judge ruled last week in favor of Illumina.