Afghanistan is a living example of US belligerence, and the negative impacts of US aggression against Afghanistan still persist a year after the US withdrawal, according to Chinese Foreign Ministry spokesperson Wang Wenbin on Friday.

The US' two-decade invasion of Afghanistan has reduced the country to rubble, ruined the future of an entire generation of Afghans, killed 174,000 people including more than 30,000 civilians, and displaced tens of millions. Even though the US troops have left, Afghanistan is yet to emerge from the long shadow of the invasion, Wang said.

Millions of Afghans are struggling on the verge of death. About three million Afghan children are too poor to go to school. And 18.9 million people face acute food shortage. The US must take responsibility for all of this, said Wang.

The US has not made developing Afghanistan its main goal, but has used it as an "experimental place," which is the fundamental reason for the problems in Afghanistan, Zhu said. 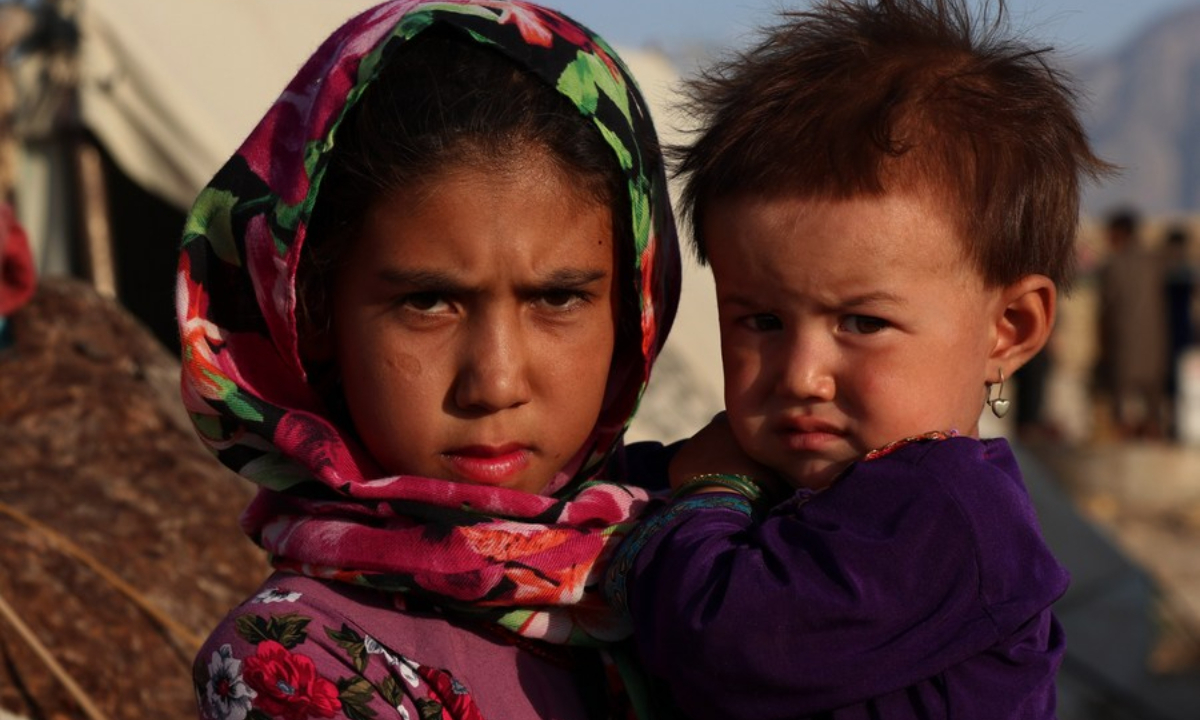 An Afghan girl holds her little sister at a displaced person camp in Mazar-i-Sharif, capital of northern Balkh province, Afghanistan, on July 22, 2021. Photo:Xinhua

The problems Afghanistan is facing are "comprehensive and systematic," but the root cause of these problems is connected with the US' 20-year-long invasion of Afghanistan, according to Zhu.

Afghanistan is a living proof of the failure of the US program of "democratic transformation". The two-decade war in Afghanistan has cost the US more than $2 trillion, claimed over 2,400 US soldiers' lives, and injured more than 20,000 US soldiers, only to end with the biggest US military debacle since the Vietnam War.  People compare the "Kabul moment" to the "Saigon moment," according to the spokesperson.

The US public also paid a dear price. According to US non-profit organizations, since 2001, 114,000 US veterans, or 18 per day, have taken their own lives, and nearly 40,000 veterans have become homeless, said Wang.

The "Kabul moment" put on full display the US' hypocrisy on democracy and human rights and its true colors of relying on power politics and bullying practices, Wang said.

The US has failed in Afghanistan, but it has yet to abandon its policy of interference. It still frequently meddles in other countries' internal affairs in the name of democracy and human rights, and continues to peddle the so-called "democracy versus authoritarianism" narrative to stoke division and confrontation around the world. This would only lead the US to new and greater failures, Wang noted.