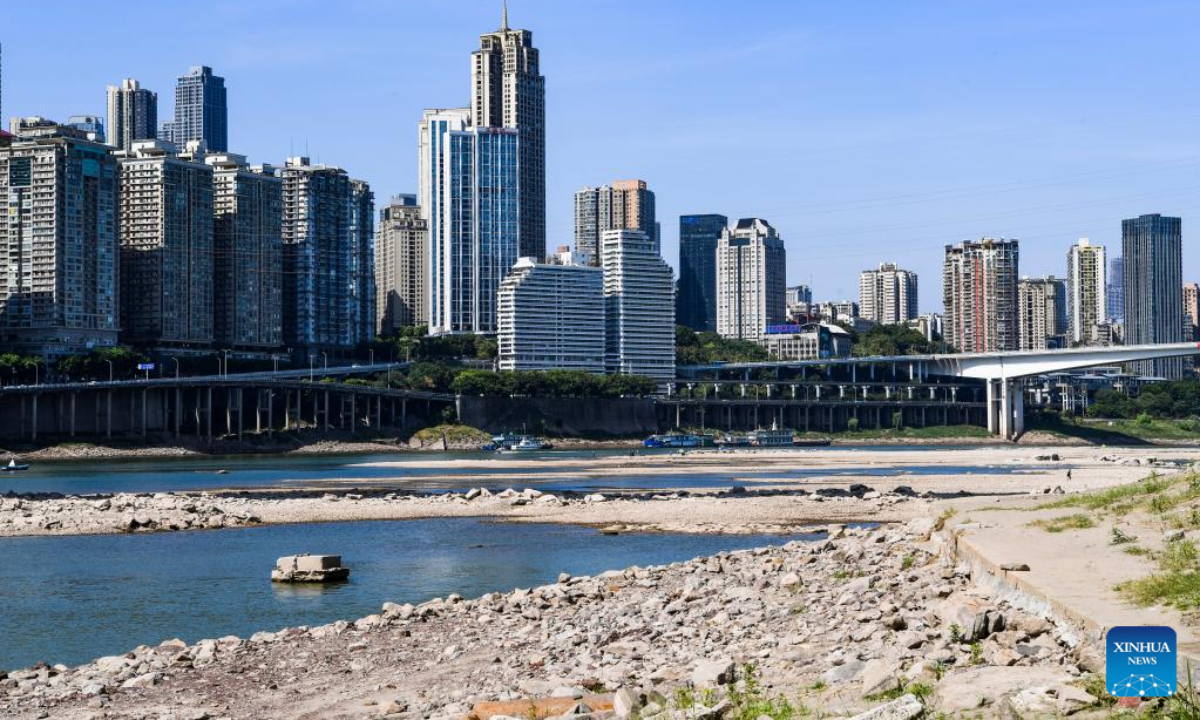 Chongqing, one of the "four furnaces" in China, is now feeling the scorching burn of China's strongest heat wave in six decades, with bushfires engulfing several mountains, and asphalt roads melting after intense baking. In order to overcome dilemmas such as power shortages and wilting crops, Chongqing turned off lights of its iconic scenic area, residents kept their hands off unnecessary electronic appliances, and the government ramped up efforts to irrigate crops. Luckily, the heat wave is likely to ebb away at the end of this month, predicted meteorologists.

The sizzling temperature, along with dry weather, has triggered bushfires in several districts in Chongqing since Thursday. The government has dispatched 5,000 firefighters, police and volunteers to put out the fires; seven helicopters were also mobilized to join the operation, and the government has transferred 1,500 people out of danger zones, according to the municipal publicity department.

The bushfires were kept under control so far, and no casualties were found, the department said on Monday.

China is now suffering from the strongest heat wave in six decades, with Southwest China's Sichuan and Chongqing facing the most severe onslaught. Temperatures in many parts of Chongqing, including the cities of Beibei, Hechuan and Tongnan, continued to surpass 40 C in recent days. A Chongqing resident posted a video online showing a stretch of asphalt road melting after a long time baking.

Government departments of the metropolis are ramping up efforts to save power and striving to conserve electricity for people's lives. An employee from the Chongqing Municipal Commission of Culture and Tourism Development told the Global Times on Monday that it has received a notice to carry out power curbs in scenic spots, including one of the most popular tourist destinations - the Hongyadong scenic area - which has become one of the city's iconic landmarks because of its dazzling lighting in the evening.

The office that runs Hongyadong announced on Sunday that the lighting decoration on the outer walls will be suspended from opening, and the public illumination will be shortened to three-fourths of the previous level.

Shopping malls in Chongqing are also required to open only from 4 to 9 pm, the Chongqing Economic And Information Commission told the media on Monday.

An employee of Longyu, an electronics factory in Chongqing, told the Global Times that its operations remained the same, and were not affected by the power shortage.

Several residents in Chongqing told the Global Times that the power shortage doesn't have much impact on their lives, as there's no limit for usage of household electricity.

"Yet I am taking measures to save energy, such as turning the temperature of the air conditioner higher than 26 C [the temperature suggested by the government], and trying not to use electric appliances that are not necessary," Cheng Ke [pseudonym] who lives in Chongqing, told the Global Times.

The extreme heat wave and drought are wilting crops. The Chongqing Municipal Commission of Agriculture and Rural Affairs told the Global Times on Monday that currently, 80 percent of the maize and 40 percent of the rice has been harvested. Now, the commission is allocating water to ensure the yield of crops.

A farmer surnamed Lu, who lives in Sangping county in Chongqing, told the Global Times that his crops, such as sweet potatoes, are affected by the drought. The government has been sending water to his village in recent days, and building pipes to divert water in the river to help with irrigation.

Middle to late August is a key period for autumn grain crops to grow in the Yangtze River basin, Sun Shao, a senior research fellow at the Chinese Academy of Meteorological Sciences, told the Global Times, noting that the persistent heat wave plus drought will reduce the yield of crops such as corn and soybeans.

On Sunday, the State Flood Control and Drought Relief Headquarters, China's Ministry of Emergency Management, and the National Food and Strategic Reserves Administration allocated equipment worth 11.67 million yuan ($1.71 million), including 130 gasoline-powered generators, 170 water suction pumps and 60 units of sprinkling irrigation systems to relieve the water shortage of Chongqing, and ease the impact of drought on the harvest.

Cheng Ke on Saturday went to the Jialing River, a tributary of the Yangtze River, and took pictures of the dried-up riverbed to capture the scene. "I've been living in Chongqing for 31 years. I've seen Jialing River flooded, I've been waterlogged, but I've never seen it as dry as this. Hopefully, the rain will come as soon as possible."

To her delight, meteorologist predicted to the media that in late August, the heat wave is likely to ebb away in some areas, including Chongqing.

Zhu Haoning contributed to this story