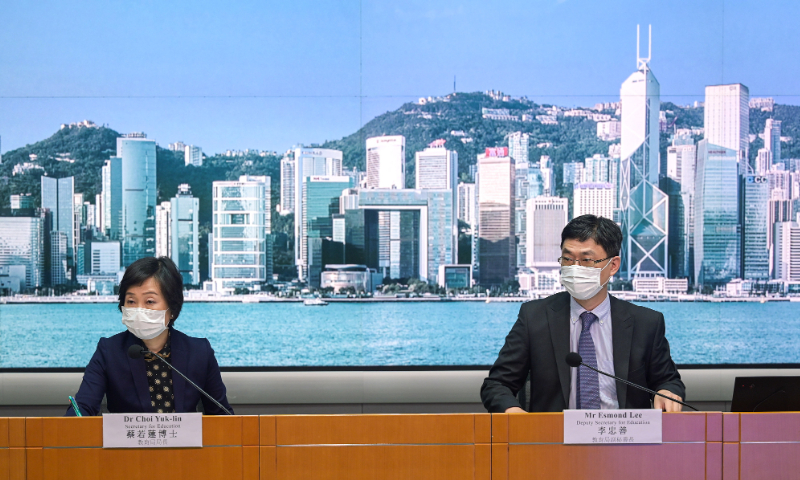 Priority will be given to Hong Kong students who study in mainland universities to enter the Chinese mainland, Secretary of Education of the Hong Kong Special Administrative Region (HKSAR) Christine Choi Yuk-lin announced on Tuesday.

"The Guangdong government has decided to take the group of students who are going to the mainland for tertiary education into special groups that can be exempted from the inbound limitation," said Choi during a news conference on Tuesday.

Currently, the mainland government provides a quota of 2,000 travelers per day for entering the Chinese mainland from Hong Kong via Shenzhen and Zhuhai. Travelers must register online and wait for the random selection. Eight special groups, however, have been exempted from the inbound limitation, including seniors and pregnant women.

As Hong Kong students studying in the mainland will be added to the priority group, more designated quarantine hotel rooms will also be added, said Choi. As was discussed with the Macao SAR government, students may be allowed to enter the mainland via Macao's borders after completing quarantine in Macao.

Inbound travelers to the Chinese mainland are required to spend seven days in a quarantine hotel and three days at home under health monitoring.

According to the government, over 18,000 Hong Kong students are studying in the mainland, and 3,000 will be starting their first academic year in 2022.

Lawrence Tang Fei, a member of the Hong Kong Legislative Council and vice president of the Hong Kong Federation of Education Workers, told the Global Times on Tuesday that although the Education Bureau said it could not arrange charter flights to send Hong Kong students to school in the mainland, the Hong Kong government's efforts in this policy adjustment are commendable.

Tang also pointed out that since the process is just starting and there may be delays in its implementation, the SAR government could take the initiative to ask the higher education authorities in the mainland for a longer grace period in registration for Hong Kong students so that they can have more time to make plans.

"This group is large, and by analyzing their situation in the mainland after this policy adjustment, Hong Kong and the mainland may be able to extend this model to more people in the political and business sectors who travel to and from Hong Kong," Jin Dongyan, a virologist and professor of the School of Biomedical Sciences at the University of Hong Kong, told the Global Times, noting that this is expected to be beneficial for the recovery of Hong Kong society.

The announcement comes on the heels of Hong Kong's announcement that it will shorten the quarantine requirement for people arriving from overseas to a three-day hotel quarantine and four-day home observation. Jin pointed out that the current situation has proved that this adjustment has not caused additional risk in terms of spread of the epidemic.

When announcing the policy adjustment this morning, the Hong Kong Education Bureau said that more isolation hotels may be opened in Macao in order to ease the pressure on mainland ports. This is also a way to explore future travel policies between Hong Kong and the mainland, Jin said.

"If further consensus can be reached between the mainland and Hong Kong, then when people enter the mainland from Hong Kong, they can be managed in Hong Kong for several days in a closed loop," Jin suggested. "This would greatly reduce the risk of the spread of the epidemic among people and would also facilitate the movement of people to and from the region."