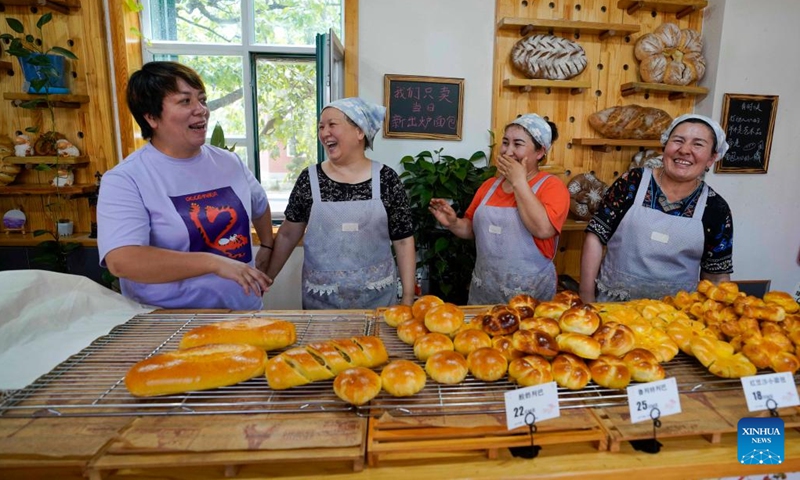 Feng Xiaoli (1st L), owner of the Liuba Bakery, chats with her employees at the bakery in Yining City, northwest China's Xinjiang Uygur Autonomous Region, June 23, 2022. Located at a commercial area of Liuxing Street in Yining City, Liuba Bakery is well known for its quality bread. Besides, it has provided job opportunities for local women to increase their income.(Photo: Xinhua)

Should China just keep silent at all and refrain from making any legitimate response and clarification in face of the US' big lies on Xinjiang-related affairs? Chinese observers questioned the latest lengthy report the US State Department released on Thursday local time, which defamed China by accusing it of actively attempting to manipulate and dominate the global discourse on Xinjiang.

Chinese observers found the US made groundless accusations in the official report entitled "PRC Efforts to Manipulate Global Public Opinion on Xinjiang" by the US Global Engagement Center -  a US government interagency organization housed at the Department of State - rather ridiculous, as the US is the dominant power with much stronger control of global media. Observers warned that every developing country in the world should be watchful over such double-standard manipulation of another country's internal affairs.

The report, which is available in English, Chinese, Arabic and French, lists the tactics that China has allegedly adopted to reach the goal such as engagement in "astroturfing" to "create the illusion of widespread grass-roots support for a policy," and deployment of "wolf warriors" and third-country influencers to "advance its narratives regarding Xinjiang."

Refuting such accusations, Wang Jiang, an expert at the Institute of China's Borderland Studies at Zhejiang Normal University, told the Global Times on Thursday, "The US is on a whole other level in terms of controlling the worldwide social media, and China is making clarification and striking back only legitimately against the US' smear campaign over Xinjiang-related affairs."

The Global Engagement Center, which was founded after the Charlie Hebdo shooting in Paris in 2015 and designed to counter extremism and terrorism, has now mutated into an anti-China agency that manipulates public opinion and propagates US ideology, Wang said.

Jia Chunyang, an expert at the China Institutes of Contemporary International Relations, told the Global Times on Thursday that the US State Department report is nothing but a distortion of the truth. It has been proven time and again that some so-called scholars such as Adrian Zenz are the ones cooking up the lies while being on the payroll of the World Uyghur Congress that serves as the umbrella organization colluding with the US to destabilize China.

And it is the US that is suppressing objective and just public opinion on Xinjiang, Jia said, citing the example of French writer Maxime Vivas, who wrote a book entitled Ouïghours, pour en finir avec les fake news(Uygurs, to put an end to the fake news) based on his two visits to Northwest China's Xinjiang Uygur Autonomous Region in 2016 and 2018 and recently published a new book Les Divagations des Antichinois en France(The ramblings of anti-China forces in France) in which he wrote about how he was under attack and threats for insisting on speaking the truth.

It seems that the US is not allowing any different voices than its own, be it from the official voice of Chinese Foreign Ministry diplomats, or from independent internet users sharing their personal experience online about Xinjiang with good faith, Wang noted.

It shows the US double standards, where any positive remarks and faithful opinion that disagrees with American value and interests are being tagged with the label of "political influence" or "fake news." Any developing country could be the next victim of US manipulation of their internal affairs and we must all stay on high alert for that, he said.

Media have reported that in 2021, Sheila Carey, consul at the US Consulate General in Guangzhou, and her colleague Andrew Chira told guests at a reception that the US government hoped its businessmen would "understand" that using the Xinjiang affairs to hype the so-called forced labor, genocide, and human rights abuses is a "tug of war" with China, and an "effective tool" to achieve the ultimate goal of getting China "completely under control."

The US understands well the reality in Xinjiang, and what the US is after is to stigmatize Chinese government and to achieve the plot of using the Xinjiang region's related topics to counter China, Jia said.

Coinciding with the release of the report, the US NBC news on Thursday disclosed that Facebook and Twitter, have cracked down on a series of covert influence campaigns designed to spread pro-US sentiment abroad, citing researchers.

A report, jointly published by Stanford University and Graphika, a social media analytics company that works with Facebook and Twitter, found hundreds of inauthentic accounts designed to spread pro-US views on current events to users in the Middle East and Central Asia. And, according to the report, much of the pro-US campaigns' efforts seemed aimed at countering messaging efforts from Russia, China and Iran. Common themes included criticizing China for its "internment" of Muslim Uygurs and Iran for its human rights record.

Chinese observers said they are not surprised by the discovery, and it was such a slap-in-the-face to the report, and the US state department is no doubt playing the hypocritical trick of a thief crying "stop thief!"

Lü Xiang, a research fellow at the Chinese Academy of Social Sciences, told the Global Times on Thursday that the report shows exactly the guilty conscience of the US, as it is are growingly anxious about its lies about Xinjiang, which becomes increasingly fragile in front of the truth.

However, Lü the US smearing efforts would continue to last but they must have run out of new tricks after already throwing out the extremely absurd wording of "genocide."