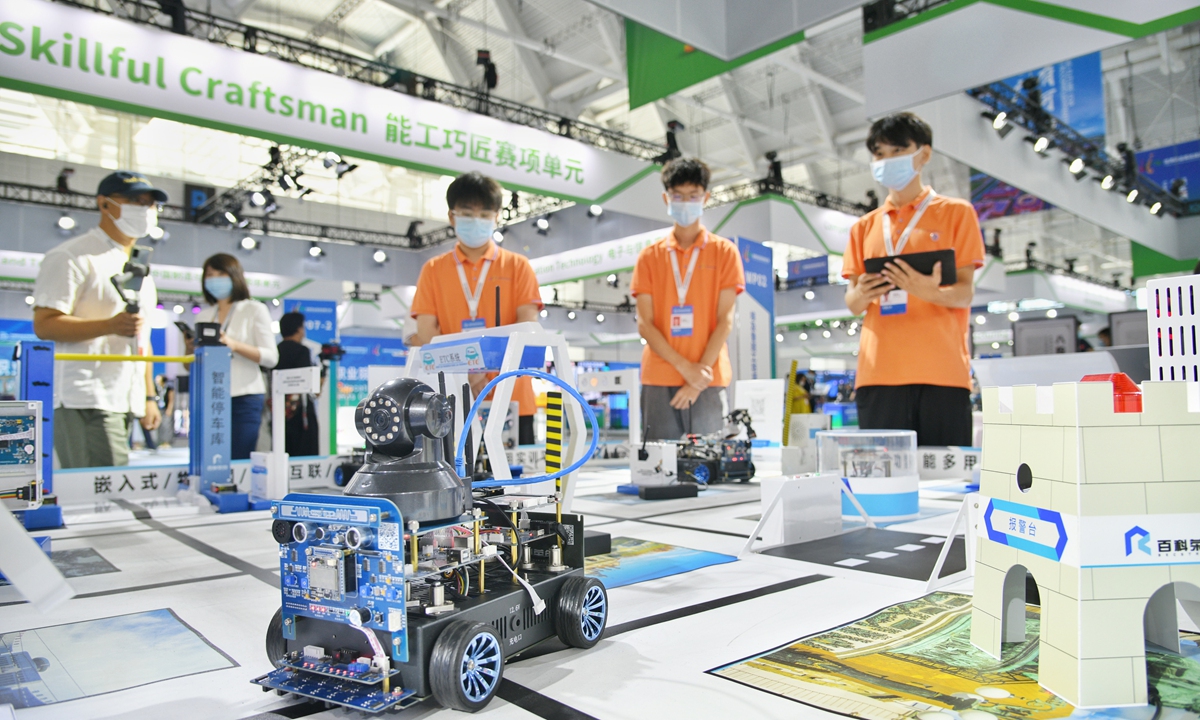 Contestants command robots to demonstrate the intelligent transportation of a sandbox on the first World Vocational College Skills Competition held in Tianjin on August 19, 2022. Photo: VCG

As China's Generation-Z - those born between the late 1990s and early 2010s - is emerging as the main labor force and consumers, their dream jobs have redefined traditional employment ideas.

New social trends and demands - such as young people's enthusiasm for virtual consumption and digital products - have given rise to niche jobs amid the government's encouragement of diversified economic development.

About 76 percent of post-millennials are willing to or are engaged in emerging careers, and 88.1 percent are willing to try or are in flexible employment, according to recently released data provided by zhaopin.com, a Chinese online recruitment service provider.

China's Ministry of Human Resources and Social Security, together with the National Bureau of Statistics, have listed 56 new occupations in four categories in recent years. The unlisted ones such as milk tea taster, calorie planner, pet baker, and other new creations continue to emerge as new explorations by younger graduates entering a competitive job market.

This trend is in line with China's encouragement of flexible employment which has been included in the government's work reports for four consecutive years.

China will see the number of new graduates from the country's universities and colleges in 2022 exceed 10 million for the first time, hitting a historic high. The number of flexible workers in China had reached 200 million by the end of 2021, accounting for more than a quarter of the total employed population of nearly 750 million, official data showed.

Amid an increasingly competitive job market, many Gen-Zers are exploring interesting part-time jobs that are normally created by a combination of social demand and personal hobbies or interests, to eschew financial risks and pursue values inspired by social involvement and responsibility. These creators normally sell their original works or services through online marketplaces on e-commerce platforms.

The emergence of new occupations has stimulated the job market, meeting consumers' creative demand for services and injecting new vitality into economic and social development, experts said, while appealing for a strengthened regulation of unprecedented factors.

Creators in the virtual world

Although these new occupations are relatively less common, they are no less lucrative, and a avatar creator is one of them. Reports show that some higher-paying part-time avatar creators can earn nearly 45,000 yuan ($6,692.7) a month, much higher than the average income in first-tier cities.

Mao Wanjin, also known as Ze Bai on the Soul platform, is a part-time avatar creator on Soul, a social platform popular among Chinese Gen-Zers in sharing their hobbies.

In 2018 when Mao began to use Soul, he noticed that people changed their profile picture at different occasions to match their emotions. Attracted by colorful profile pictures, Mao started to try profile creating by using the provided tools on the platform.

"Being a profile picture creator is not as easy as it appears to be. Everything from how to arrange things in the right position and how to create visually beautiful head icons, to how to make the profile be in sync with a user's emotions… it takes time to figure it out," Mao told the Global Times.

He once spent three days and nights creating a satisfactory head icon. During that time, he slept for only a few hours and barely did anything else, "just thinking and adjusting incessantly."

After a period of exploration, Mao successfully formed his own style and created many imaginative and thoughtful virtual works. His works are also well received by other users.

At first Mao didn't take creating profile pictures seriously as a job but as a mere hobby instead. For him, what profile creation brings is the happiness through personal and emotional self-expression. It has also brought him a great sense of accomplishment seeing his work appreciated by others.

Other than that, creating profile pictures has also brought Mao an additional stream of income. There was a month in which he earned more than 50,000 yuan from creating icon pictures.

He has also noticed that, nowadays, the younger generation demands more than a mere salary as many attach great importance to their hobbies and self-actualization when looking for a suitable job.

For those who already have a job, Mao's advice for them is to try new careers in their spare time. "Take profile creating for example, what it takes is time. Try it if you want it. Only through practice can one know if they are suitable or not," he said.

On the same platform, there are at least 80 profile creators like Mao, either full- or part-time.

Che Bin, vice president and product manager at Soul, said that with more young people choosing to combine their hobbies and careers, more new jobs will likely be explored and discovered.

"Spurred on by passion, the creativity and innovative ability within them may also lead to a rise in values they produce," Che said.

Che believes that the emergence of profile creators is also as a result of the metaverse, which is expected to create more new and unique jobs.

When asked about the future of the metaverse, Che explained that as the next chapter of internet development, the metaverse may lead to a higher form of digital lifestyle. The daily demands of real life such as dressing, commuting, and finding suitable accommodation will be reconfigured digitally, and new jobs such as a metaverse fashion designer and a metaverse architect will emerge.

Careers in the field of new technologies or virtual worlds have a strong appeal for Gen-Zers. Jobs like blockchain architect, studio set technician, and short video script writer are also the subject of growing interest, given Gen-Z's enthusiasm for creating and consuming digital products and services. 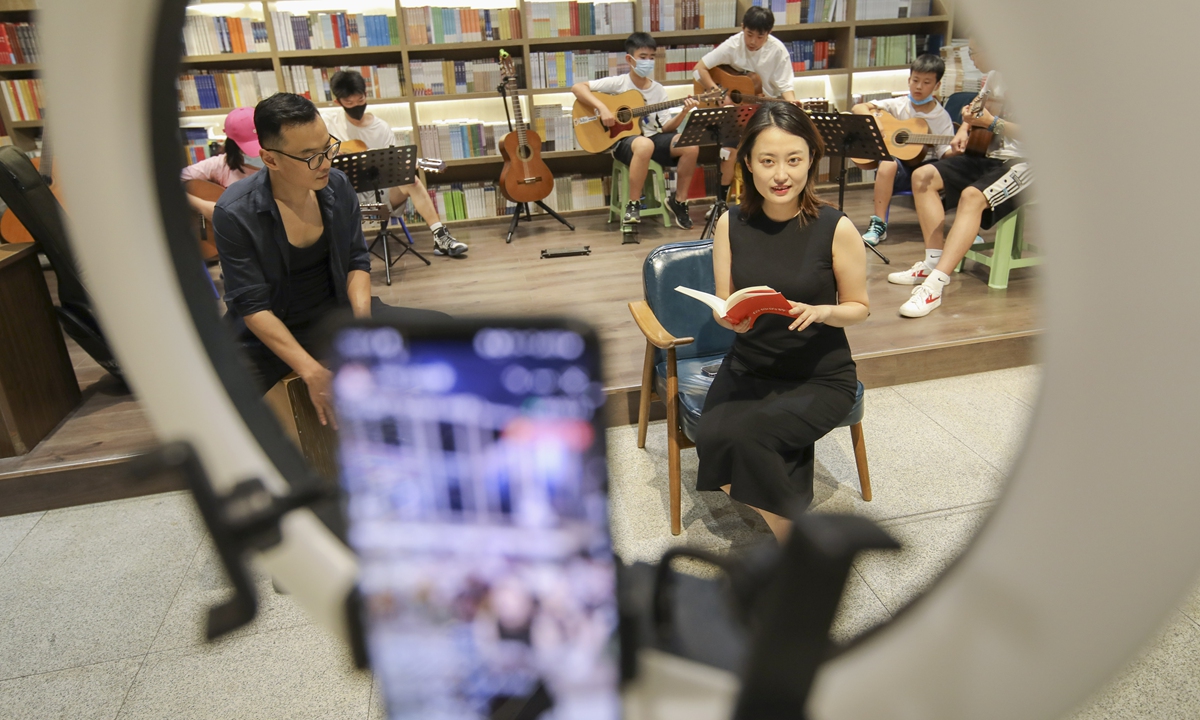 A social media influencer (right) reads through livestream for netizens at a Xinhua Bookstore in Linyi, Shandong Province on August 20, 2022. Photo: IC

In another case, Xiao Yi, 21, who is a student majoring in film directing, has been serving as an online party host on the Soul platform. During an online wedding, he received not only red envelope from the newlyweds, but also offers from other users inviting him to host their activities with financial reward.

Offline role-playing games or immersive adventure escape rooms - the most popular forms of entertainment among current Chinese young - are another virtual world that attracts young job seekers. Many young people love to be live actors in such games to help the players feel immersed in the themed world they're exploring.

Huang Xiaolan, a fan of escape rooms, chose to become a live actress in a Beijing-based immersive drama experience studio featuring war and espionage themes after her graduation. Her typical role is to add color to the plot, to place more challenges along the players' paths, offer help when players get stuck, and help with pace via her character. 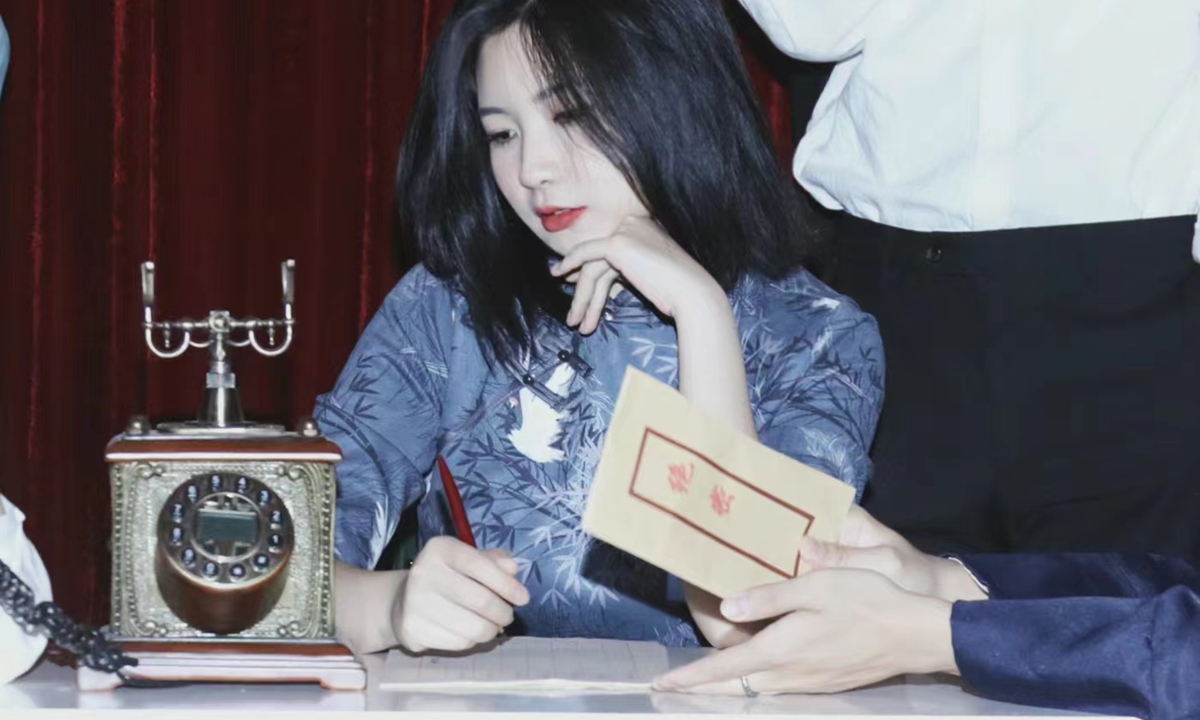 For Huang, an acting major graduate born in 2001, interacting with players during the performance is both a novelty and a bigger challenge than traditional performances.

"The job requires strong improvisation and coping skills. Unlike in traditional performance, players focus more on skills and logic rather than appearance. Their positive feedback inspired me a lot to continue, and it is more exciting than being a regular cast and crew member," she told the Global Times.

With the diversification of the entertainment industry in the future, many drama graduates who are unable to enter the film industry will gradually consider such a career to be a very good alternative choice, she said.

Her relationship with her young boss is akin to family or friends, breaking away from the serious and bureaucratic style of the traditional workplace.

Gen-Zers reshaping office culture and relationship dynamics has been a hot topic recently on Chinese social media as videos showing Gen-Z employees in the workplace bravely showing their true emotions have gone viral online, such as how they refuse the unreasonable overtime culture, or protest against supervisors' bureaucratic speeches.

A more humane workplace culture is stressed by many young people when choosing a career. And that is a reason why many Gen-Zers are opting for new industries or novel careers.

Along with the innovative jobs cited above, some more pragmatic up-and-coming professions are well sought-after among young job seekers.

The Chinese online shopping platform Taobao released a list of top 10 new occupations among young Chinese job seekers at the end of 2021, which include dream painters, cat food tasters, and discarded cell phone polishers. This reflects Gen-Z's new employment concept of breaking with tradition and courage to innovate.

These young people grew up in the era of China's economic boom and are more diverse, free, pragmatic, and idealistic in career choice. "Turn your hobby into your job" is their pet phrase.

The trend toward flexible employment has broadened the possibilities for young people to achieve a work-life balance and also fits in with their view toward what makes a successful career.

Some socially responsible jobs such as "hospital chaperone" - accompanying patients through medical appointments or picking up medicine and test reports - are also becoming popular part-time jobs among young people.

"Gen-Zers have higher requirements for the overall workplace atmosphere. The labor-intense, low-wage career opportunities are clearly not satisfactory for them. They prefer unconstrained, open careers with room for creativity," said Huang. Unlike older generations, who preferred cradle-to-grave welfare support in state-owned institutions, Gen-Z is not obsessed with just "stability." In their eyes, the most important thing is to choose a career that they love and are willing to try. What's behind is their confidence for the vitality of China's diversified consumer market, said Huang.