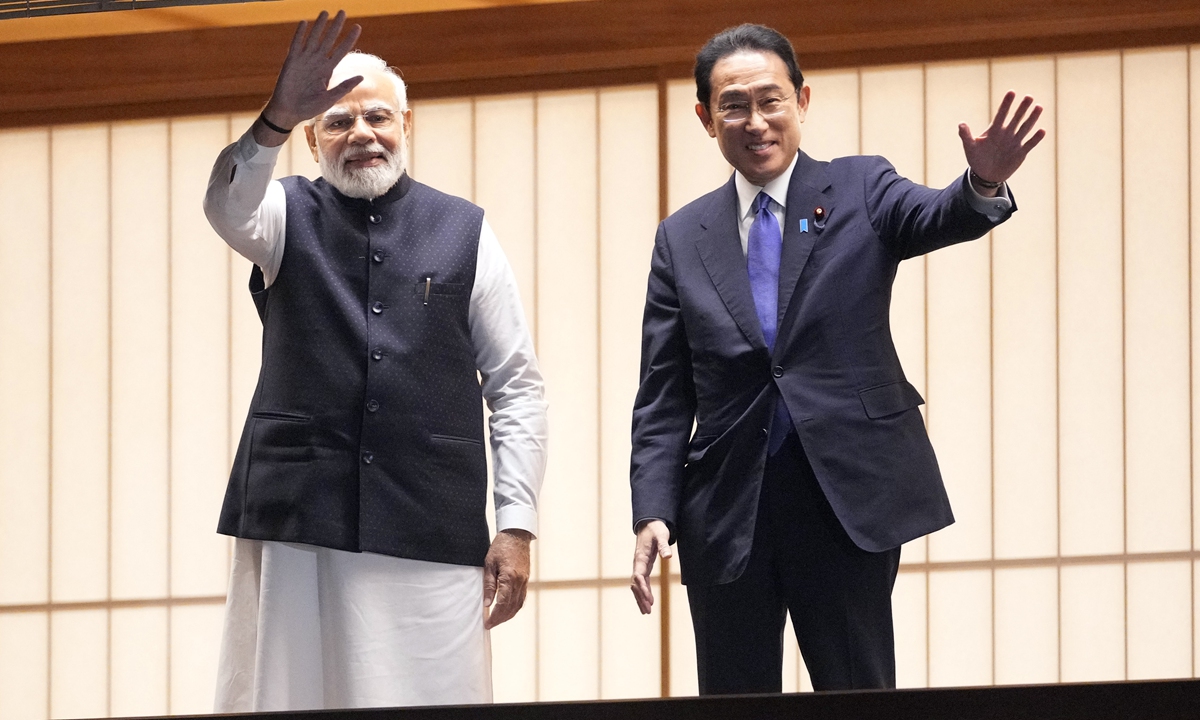 Two potential big events in September in Tokyo - the second round of "two-plus-two" (2+2) security talks involving Japanese and Indian foreign and defense ministers, and the state funeral for former Japanese Prime Minister Shinzo Abe with the Indian leader expected to attend - will witness a further promotion of ties between the two Asian countries. But Japan and India should not target another major power, China, in the region with their outdated mentality of geopolitical confrontation while warming up their relations, observers warned.

Kyodo noted that Modi, "who had a close relationship with Abe," will meet with Prime Minister Fumio Kishida during the visit.

Indian media outlet The Hindu stressed that the Indian side is yet to announce the visit and quoted a senior official saying that the visit is "possible."

The Indian media also claimed that Abe was widely acknowledged as the driving force behind the Indo-Pacific QUAD, a group of four countries - the US, Australia, India and Japan - that "tried to reorder the maritime domain stretching from the Indian Ocean to the South China Sea and beyond."

Meanwhile, the two countries are also planning to hold the second round of "2+2" security talks on September 8 in Tokyo. The two countries launched the "2+2" framework in 2019.

At the planned ministerial security talks, joint exercises involving the Japanese Self-Defense Forces and the Indian military are expected to be involved among other topics, according to the Japanese media report.

In recent years, the two Asian countries have enhanced their relationship especially during Abe's tenure with an evident major purpose - trying hard to contain China's peaceful development in the region, Chinese observers pointed out.

Qian Feng, director of the research department at the National Strategy Institute at Tsinghua University, predicted that Japan-India relations will be further strengthened in terms of politics and military cooperation as they share some similar considerations over the regional situation.

The closer ties between Japan and India on defense, which apparently target China, would largely increase the uncertainties and concerns over security in the region, Qian warned. He urged the two countries to abandon the outdated mentality of geopolitical confrontation.

As the border standoff between China and India continues, more and more conservative people in India see China as a security challenge, Qian said. "This hostile mind-set among some Indians has driven the country to bound tighter with its allies - the US and Japan - in an attempt to keep China in check," and in response China should be on alert, he noted.

However, different from Japan, which sees its alliance with the US as its "security pillar" and is getting more and more desperate in provoking China on sensitive issues such as the Taiwan question, India has always tried to maintain its diplomatic independence and has its own calculations in the region, Qian stressed.

Also, given that the border dispute has been basically under control and the China-India ties thawed gradually after rounds of commander-level talks, the differences between China and India are smaller than the benefits of their cooperation, observers believe.

In July, China and India held the 16th commander-level talks, the third this year, which marked an overall positive atmosphere between the two neighbors, although it will take some time for the two countries to figure out a solution both sides can accept, observers pointed out.

While the US and Japan are sparing no effort to further accelerate the so-called Indo-Pacific Strategy through the QUAD mechanism, India would try to prevent it from openly confronting China, as it is not in the interests of India to take sides between major powers, Qian said.