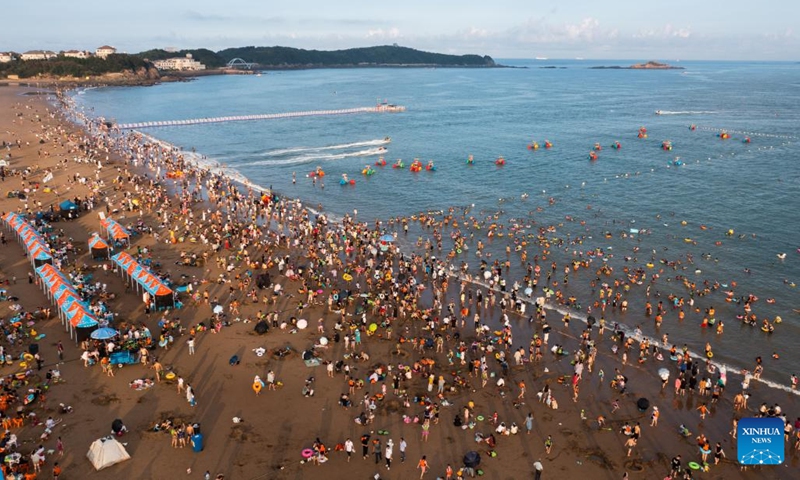 As several regions in China are sweltering under temperatures above 40 C, the country's meteorological authorities have continued to issue high temperature alerts for 25 consecutive days, and meteorologists believe the summer of 2022 has witnessed the strongest heat wave in six decades. They also predicted the long-lasting heat wave will become a "new normal" in the future due to aggravating global warming.

The lasting sizzling temperature has resulted in drought in many parts of China, including the main grain producer Henan; and pushed electricity usage to a limit. Experts believe the heat wave will be a stimulus for the Chinese government to gear up preparation for the "new normal" by speeding up the pace in embracing industrial upgrading, new and renewable energies; and boost investment in infrastructure and modern agriculture.

Zhushan, a city in Central China's Hubei Province, was recorded as the hottest Chinese city with temperature surpassing 44 C on Saturday. Jiangsu issued a warning on Sunday saying that surface temperature of some parts of the province will exceed 72 C.

According to media's calculation, more than 10 provincial-level regions, including Zhejiang, Jiangsu and Anhui provinces, are living with temperatures ranging from 40 C to 42 C this weekend.

Some tourist spots also closed due to the high temperature. Operator of the 71-meter tall Giant Buddha of Leshan, one of the most important cultural treasures of China, in Southwest China's Sichuan Province announced on Sunday that it will close the feet area of the statue to tourists, because of high temperature.

Management of Chishui waterfall in Zunyi City, Southwest China's Guizhou Province, said on Saturday that it has closed the waterfall spot, because the upper stream of the waterfall has dried up due to high temperature. It did not state when it'll reopen.

A nucleic acid tester surnamed Cheng, in Southwest China's Chongqing, which is also experiencing temperature around 40 C these days, told the Global Times that they now take shift frequently so to avoid being exposed in the heat wave for too long. "Sometimes the nearby supermarket owners will give us watermelon and ice cubes to cool ourselves down," she said.

This year's heat wave is the strongest in China ever since the country established national meteorological observations in 1961, and the longest, Sun Shao, a senior research fellow from the Chinese Academy of Meteorological Sciences, told the Global Times on Sunday.

Sun said that compared with the record-breaking 2013 heat wave in China, which lasted 62 days, this year's heat wave started pretty earlier. "We already saw 62 days of heat wave until Sunday, and its scope of influence and the highest temperature already surpassed those of 2013," said Sun, noting the heat wave is likely to extend another week.

He attributed the reason for such abnormal weather to atmospheric circulation patterns, especially the abnormalities of Western Pacific subtropical high （which exerts important influences on anomalous weather and climate in East Asian monsoon region）. 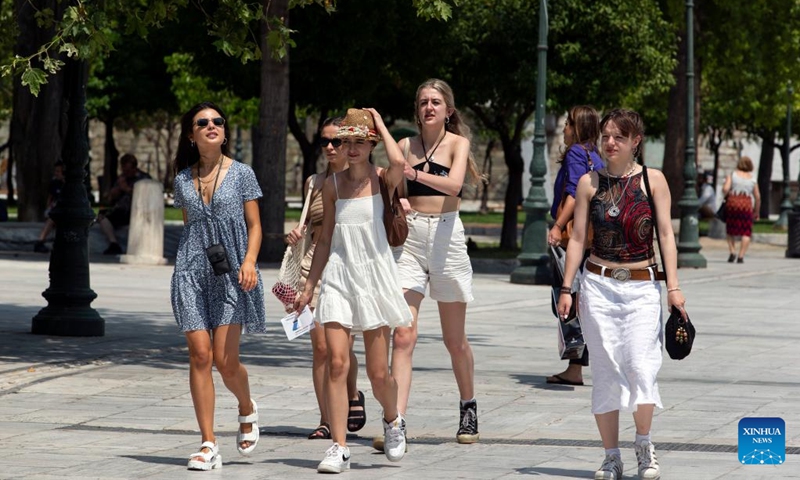 The high temperature also resulted in drought in many parts of China, including Henan, one of the biggest food producers in the country, and many provinces alongside the Yangtze River. About 20 percent of Hubei is now experiencing drought, according to media report.

The Henan provincial government issued a notice on Sunday asking local governments to closely monitor the drought, and to divert water in a scientific manner. It also asked officials to exploit new water sources for people in drought areas.

Henan tops China's list of wheat planting, and its production occupies one-fourth of the national production, according to a report from China's Ministry of Agriculture in 2021.

Sun warned that because the heat wave started earlier this year, grain yield in some places, such as Sichuan, may subject to heavier blow than in 2013, and the drought situation in lower stream of the Yangtze River region will likely become worse as high temperature extends.

The expert advised to adjust temperature of farmlands by water, and use irrigation water to keep grains well watered.

Grist, an environmental news publication, reported in July that as heat waves hit Europe and Asia this week, "heatflation" could lead to increased global food prices.

Yet Chinese experts whisked off concern of food shortage in China, saying China has stable grain reserves, and it is a big food producer, which can realize self-reliance on food.

China's National Food and Strategic Reserves Administration said on Sunday that the country's main producing areas have purchased more than 46 million tons of wheat, and the overall purchase progress has exceeded 70 percent.

The high temperature is also pushing usage of electricity to a limit. According to statistics from State Grid Corporation of China, electricity sales in Shanghai, a metropolis with a population of 24 million, increased 38.41 percent in July, compared with the same period last year, and the figure rose to 40.24 percent in the first week of August.

The Global Times learned from a cinema in Hangzhou, capital of Zhejiang, that it has been ordered to shut down air conditioning under a power restriction order on Sunday.

"We received the notice [to shut down air conditioning] along with many other cinemas," said an employee of the cinema, noting that the power restriction order has been put on many industrial and commercial facilities in order to ensure residential electricity usage.

Experts said that the demand of electricity keep soaring due to high temperature, which pushes high the electricity consumption at peak hours; governments' measures to guide users to shift away from peak time usage of electricity can relief the pressure of peak demand.

Meteorologists also predicted such constant heat wave will become a "new normal" in the future. Chen Lijuan, an expert at National Climate Center told media on Saturday that it is not solely a weather problem. "Against the backdrop of global warming, heat wave will be a 'new normal.' The high temperature starts early, leaves late and lasts long, this will become more and more obvious in the future," Chen noted.

Tian Yun, former vice director of the Beijing Economic Operation Association, told the Global Times that such "new normality" poses challenges to China's economic development, such as the production industry, which relies heavily on energy, and it brings the problem of inflation closer, as demand for energy keeps rising.

In order to cope with those challenges, the government needs to speed up the pace in embracing industrial upgrading, new and renewable energies; and boost investment in infrastructure, suggested Tian.

Zhang Jianhua, head of the National Energy Administration, said in late July that China's development of non-fossil energy has continued unabated, noting that the share of non-fossil energy in China's total energy consumption is expected to grow at an average rate of 1 percentage point a year from now to 2030.

Lin also suggested that it is important to introduce new technology in agriculture, such as building subsurface irrigation, drought relief facilities, and combining agriculture with modern technology, such as big data and AI, to weaken the weather's impact on crops.