3 steps to tell when a slot is close to hitting the jackpot-Malaysia cannot decouple from China's economy; closer integration expected: Malaysian ​ambassador Raja Dato' Nushirwan Zainal Abidin, Ambassador of Malaysia to China at the launch session of the Malaysia Truly Asia Festival on Monday Photo: Courtesy of Malaysian embassy in China

Malaysia looks forward to an early resumption of people-to-people exchanges with China that have been cut off by the epidemic, Raja Dato' Nushirwan Zainal Abidin, Ambassador of Malaysia to China, said at the launch session of the Malaysia Truly Asia Festival on Monday, while highlighting outstanding trade achievements and business cooperation between the two countries during the pandemic.

As the first country in ASEAN to establish diplomatic ties with China in 1974, Malaysia has enjoyed fruitful bilateral relations in the political, economic and people-to-people aspects. Malaysia has also been one of the top travel destinations in terms of tourism, education and business for the Chinese community. On April 1, Malaysia fully reopened its borders after two years, enabling visitors from all over the world to visit, the ambassador said, calling for more Chinese visitors in the future.

"It is very difficult to imagine a situation in which the economies of Malaysia and China are decoupled. I think we will continue to see a closer integration of both our economies. So that is why at the political level it is very important for us to work together, to make sure that our mutual interests are always defended," he said.

Present Malaysia-China bilateral relations are excellent and as strong as they have ever been. As proof of this, according to Chinese statistics, bilateral trade up to July this year was $114.5 billion, an increase of 20.7 percent year-on-year. Last year alone, total bilateral trade reached $176.8 billion, an increase of 34.5 percent year-on-year. This made Malaysia China's ninth-largest trading partner, according to the ambassador.

He underlined that high-level visits between the two countries are also proceeding apace. For example, Chinese State Councilor and Foreign Minister Wang Yi visited Malaysia from July 11 to 12, which had a positive influence at a time when the world is facing the effects of COVID-19 and an uncertain international environment.

During the visit to Malaysia, Wang said that China is ready to work with Malaysia to set new goals and priorities for bilateral relations so as to elevate their ties to a new high, and both sides have reached a consensus on a series of important issues, the Xinhua News Agency reported. 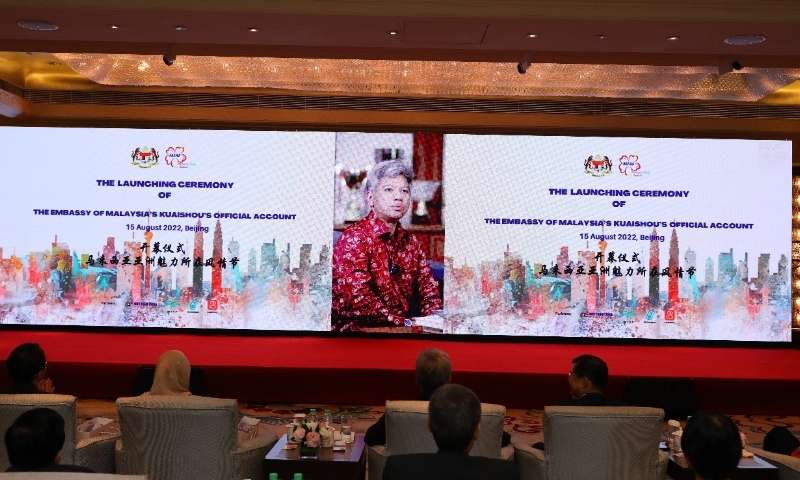 The launch session of the Malaysia Truly Asia Festival on Monday Photo: Courtesy of Malaysian embassy in China
The ambassador thanked China for its support for Malaysia through various cooperation mechanisms, stressing that the 55th ASEAN foreign ministers' meeting that just concluded in Cambodia contributed to regional integration in Southeast Asia.

"The meeting gives direction and support for the regional integration effort. We want to make sure that all the countries in ASEAN will be able to benefit mutually and equitably in this area. If you look at the joint communique of the foreign ministers, it runs to about 29 pages which were related to regional integration," the ambassador told the Global Times on Monday.

He said he expects closer ties between China and ASEAN for building a strong and healthy bloc, which can be a "solid platform for regional peace and stability in our region."

"We have no choice but to work together, regardless of political beliefs or ideologies or differences, which we may have amongst one another," he noted.

However, it cannot be denied that COVID-19 has left its mark, the ambassador said. About 3.1 million Chinese citizens visited Malaysia in 2019 and obviously the numbers have fallen drastically in the past few years. The ambassador expects a resurgence in the number of Chinese tourists, saying that he is "confident and hopeful that the situation will recover to what it was before, albeit in a new normal."

The envoy also revealed that both governments are making efforts to help Malaysian students come back to China to resume their studies, and the process has already begun.

"That which was rent asunder will be rejoined, that which was stretched will be recompressed," he said, as well as expressing his full support for the measures taken by the Chinese government to address COVID-19.

The festival organized by the Embassy of Malaysia in Beijing and supported by MayCham China aimed to raise awareness of Malaysia's identity among the Chinese public and was held in conjunction with Malaysia's 65th National Day. A series of events including the 17th Palm Oil Health and Nutrition Forum, Peranakan Art Exhibition and Malaysia Truly Asia Food Week will take place during the two-week festival from August 15 to 31. The festival will close with the National Day reception on August 31.